A single platform for localization

Let’s get straight to the biscuits. From now on, you only need one tool to localize Mozilla stuff. That’s it. Single user interface, single translation memory, single permission management, single user account. Would you like to give it a try? Keep on reading!

A little bit of background.
Mozilla software and websites are localized by hundreds of volunteers, who give away their free time to put exciting technology into the hands of people across the globe. Keep in mind that 2 out of 3 Firefox installations are non-English and we haven’t shipped a single Firefox OS phone in English yet.

Considering the amount of impact they have and the work they contribute, I have a huge respect for our localizers and the feedback we get from them. One of the most common complaints I’ve been hearing is that we have too many localization tools. And I couldn’t agree more. At one of our recent l10n hackathons I was even introduced to a tool I never heard about despite 13 years of involvement with Mozilla localization!

So I thought, “Let’s do something about it!”

9 in 1.
I started by looking at the tools we use in Slovenian team and counted 9(!) different tools:

Eating my own dog food, I had already integrated all 3 terminology services into Pontoon, so that suggestions from these sources are presented to users while they translate. Furthermore, Pontoon syncs with repositories, sometimes even more often that the dashboards, practically eliminating the need to look at them.

So all I had to do is migrate projects from the rest of the editors into Pontoon. Not a single line of code needed to be written for Verbatim migration. Pootle and the text editor were slightly more complicated. They were used to localize Firefox, Firefox for Android, Thunderbird and Lightning, which all use the huge mozilla-central repository as their source repository and share locale repositories.

Nevertheless, a few weeks after the team agreed to move to Pontoon, Slovenian now uses Pontoon as the only tool to localize all (31) of our active projects! 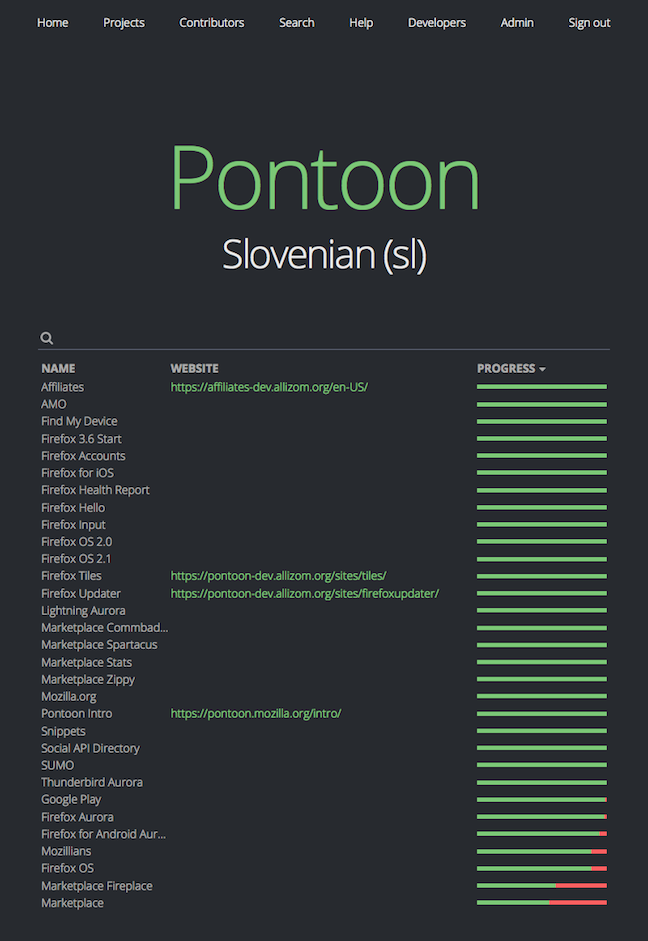 Who wants to join the party?
Slovenian isn’t the only team using Pontoon. In fact, there are 2 dozens of locales with at least 5 projects enabled in Pontoon. Recently, Ukranian (uk) and Portugese Brasil (pt-BR) have been especially active, not only in terms of localization but also in terms of feedback. A big shout out to Artem, Marco and Marko!

There are obvious benefits of using just one tool, namely keeping all translations, attributions, contributor stats, etc. in one place. To give Pontoon a try, simply select a project and request your locale to be enabled. Migrating projects from other tools will of course preserve all the translations. Starting today, that includes attributions and submission dates (who translated what, and when it was translated) if you’re moving projects from Verbatim.

And, as you already know, Pontoon is developed by Mozilla, so we invite you to report problems and request new features. We also accept patches.

We have many exciting things coming up by the end of the summer, so keep an eye out for updates!